“Therefore, since we are surrounded by such a great cloud of witnesses, let us throw off everything that hinders, and the sin that so easily entangles, and let us run with perseverance the race marked out for us.”
Hebrews 12.1

We are certainly grateful for this “cloud of witnesses”, and we would like to acknowledge some of them here whose testimony has helped us to establish our fellowship and to be able to continue fruitfully.  There is only a short summary with each picture but we have put a link to a site for each one so that you can find out more. 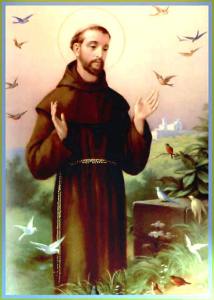 Francis was born in 1181 at Assisi, Umbria, Italy as the son of a rich cloth merchant.  He had a good education but became known for his street brawling and a love of pleasure.  He went to war as a soldier and it was during his time as a prisoner of war that Christ called him to leave his worldly life and follow Him.

Francis took the Gospel as his rule for life and renounced all his father’s riches, taking instead a life of simplicity together with many brothers who began to follow him in 1209.

With the Pope’s blessing he called his collection of brothers The Brothers Minor, but their order became known as the Franciscans.  Together they shared everything they had, worked with their hands, cared for lepers, fed the poor, and restored churches.

During his life Francis wrote many prayers and hymns, and was well known for his ability to relate to men and women of every level of society and the birds and animals.  He saw many miracles.  In 1224, while in meditation on Mount Alvernia in the Apennines, Francis received the stigmata which continued to periodically bleed for the remaining two years of his life.

It is by reading the full accounts of his life that are freely available in books and on the Internet that our fellowship have found proof that the simple shared life that our Lord Jesus lived with His disciples is indeed possible.  We have read stories of Francis’ life to our children in our family times at home, and around the campfire at our church camps.  Little by little the Holy Spirit has inspired us to move closer to the example that he has left for us.

This link below will help you find out more.
http://en.wikipedia.org/wiki/Francis_of_Assisi 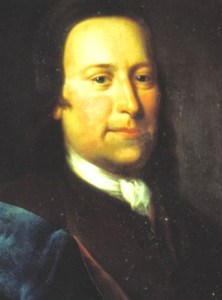 Nicolas von Zinzendorf was born in Dresden, Germany in 1700.  His father died when he was an infant and he was raised in the castle of his pietist grandmother.  This resulted in him having a deep faith during his childhood.  As a teenager at Halle Academy, he and several other young nobles formed a secret society called the Order of the Grain of Mustard Seed.  The aim of this group was to use their position to spread the Gospel.

When making a tour as a young aristocrat he saw the painting by Domenico Feti called “Behold the Man”.   The title “This have I done for you – Now what will you do for me?” greatly moved Nicolas and he vowed to dedicate his life to the service of Christ.

In 1722 Nicolas was asked by a group of Moravians to settle on his land.  They settled in a town called Herrnhut, or “the Lord’s watch”.  This group of Moravians went through a time of serious divisions so Zinzendorf left his public life and worked among them.  He led daily Bible study and prayer meetings and together they formulated, “the Brotherly Agreement”.

Residents of Herrnhut were asked to live by these Biblical principles.  What followed was a “Moravian Pentecost” — a powerful revival.  This led to the 24 hour prayer meeting where members took turns to keep the intercession going for every need in the church and missions for 100 years.  In 1731 Zinzendorf brought back to Herrnhut a converted slave from the West Indies.  This resulted in Herrnhut sending their first two missionaries to St Thomas to live among the slaves and preach the Gospel there.   This was the first organised Protestant mission work, acknowledged by William Carey in his journal.  The Moravians were to go on and send missionaries all over the world.  Zinzendorf did not think of the Moravians as a denomination but would often start a church and school in an area and then turn it over to the local Lutheran Church or Reformed Church or other denomination.

Our fellowship gains from Zinzendorf the non-denomination approach to the Lord’s work, seeing the Body of Christ as our identity.  As we approach the last days and persecution becomes world-wide, this attitude will be very important for our testimony to remain joyful and with grace.   We also see the Moravians’ faithfulness in prayer, and their shared life together as being essential to allow the Holy Spirit to move freely through us.

Basilea was born in 1904.  She trained as a teacher and social worker and obtained a doctorate in psychology in 1934, but her faith in the Lord Jesus and total dependance on Him was what qualified her to lead the community of Mary Sisters at Darmstadt, Germany.

Her faith was tested as Hitler came to power.  As the national president of the Women’s division of the German Student Christian Movement (1933-35) she refused to comply with the Nazi policy which would bar Jewish Christians from the meetings.

The Sisterhood began on September 11, 1944 after Darmstadt was destroyed in an air-raid and over 12,000 were killed.

A chapel was built where the Lord Jesus would receive adoration, and a mother house for accommodation for the sisters.  They write,”All we had was 30 marks, but our financial backer was the Lord – as even the building inspectors came to accept! ‘Our help is in the name of the Lord, who made Heaven and earth’ (Psalm 124.8) was the scripture He had given us.’ ”  So both buildings were put up by faith, using materials mainly salvaged from the ruins in Darmstadt.  They had a prayer tent erected beside the building site where continuous prayer was offered in quarter hour shifts to bring every detail before the Heavenly Father.

A book “Realities”, by Mother Basilea, has blessed many in our fellowship as it recounts many of the lessons learned in those early days for the Mary Sisters.  For example she tells of the dumpcart being derailed until they had put all relationships with one another right.  Part of their rule says — “Repent daily and you will daily have a foretaste of heaven.  Repent abundantly, and you will partake abundantly in the kingdom of heaven.”

You can use this link below to find out more from their website.
http://www.kanaan.org/

Sometimes in our evening meeting one of our men will read from a book that records the life of a “pioneer of faith”.  One such book is “The Secret of the Strength” by Peter Hoover.  It records the lives of the Anabaptists some 450 years ago.  It is so encouraging for us to read the way the Lord guided them to live, and realise the same Lord is leading us too — in the same way!